Attendees of the 1981 Space Invaders Championship attempt to set the highest score.
The earliest known video game competition took place on October 19, 1972, at Stanford University for the game Spacewar, where students were invited to an "Intergalactic spacewar olympics" whose grand prize was a year's subscription for Rolling Stone. The Space Invaders Championship held by Atari in 1980 was the earliest large scale video game competition, attracting more than 10,000 participants across the United States, establishing competitive gaming as a mainstream hobby.

In the summer of 1981, Walter Day founded a high score record keeping organization called Twin Galaxies. The organization went on to help promote video games and publicize its records through publications such as the Guinness Book of World Records, and in 1983 it created the U.S. National Video Game Team. The team was involved in competitions, such as running the Video Game Masters Tournament for Guinness World Records and sponsoring the North American Video Game Challenge tournament.

During the 1970s and 1980s, electronic sports players and tournaments begun being featured in popular newspapers and magazines including Life and Time. One of the most well known classic arcade game players is Billy Mitchell, for his listing as holding the records for high scores in six games including Pac-Man and Donkey Kong in the 1985 issue of the Guinness Book of World Records. Televised eSports events aired during this period included the American show Starcade which ran between 1982 and 1984 airing a total of 133 episodes, on which contestants would attempt to beat each other's high scores on an arcade game. A video game tournament was included as part of TV show That's Incredible!, and tournaments were also featured as part of the plot of various films, including 1982's Tron.

Large eSports tournaments in the 1990s include the 1990 Nintendo World Championships, which toured across the United States, and held its finals at Universal Studios Hollywood in California. Nintendo held a 2nd World Championships in 1994 for the Super Nintendo Entertainment System called the Nintendo PowerFest '94. There were 132 finalists that played in the finals in San Diego, CA. Mike Iarossi took home 1st prize. Blockbuster Video also ran their own World Game Championships in the early 1990s, co-hosted by GamePro magazine. Citizens from the United States, Canada, the United Kingdom, Australia, and Chile were eligible to compete. Games from the 1994 championships included NBA Jam and Virtua Racing.

Esports tournament prize amounts, 1998–2014.
Recently, eSports has gone through tremendous growth, incurring a large increase in both viewership and prize money. Although large tournaments were founded before the 21st century, the number and scope of tournaments has increased significantly, going from about 10 tournaments in 2000 to about 260 in 2010. Many successful tournaments were founded during this period, including the World Cyber Games, the Intel Extreme Masters, and Major League Gaming. The proliferation of tournaments included experimentation with competitions outside traditional eSports genres. For example, the September 2006 FUN Technologies Worldwide Webgames Championship featured 71 contestants competing in casual games for a $1 million grand prize.

This period was also the peak of televised esports. Television coverage was best established in South Korea, with competitions featuring StarCraft and Warcraft III regularly televised by dedicated 24-hour cable TV game channels Ongamenet and MBCGame. Elsewhere, eSports television coverage was sporadic. The German GIGA Television covered eSports until its shutdown in 2009. The UK satellite television channel XLEAGUE.TV broadcast eSports competitions from 2007 to 2009. The online esports only channel ESL TV briefly attempted a paid television model re-branded GIGA II from June 2006 to autumn 2007. The French channel Game One broadcast e-sport matches in a show called "Arena Online" for the Xfire Trophy. The United States channel ESPN hosted Madden NFL competitions in a show called Madden Nation from 2005 to 2008. DirecTV broadcast the Championship Gaming Series tournament for 2 seasons in 2007 and 2008.CBS aired prerecorded footage of the 2007 World Series of Video Games tournament that was held in Louisville, Kentucky. The G4 television channel originally covered video games exclusively, but broadened its scope to cover technology and men's lifestyle, though has now shutdown.

The popularity and emergence of online streaming services have helped the growth of eSports in this period, and are the most common method of watching tournaments. Twitch, an online streaming platform launched in 2011, routinely streams popular eSports competitions. In 2013, viewers of the platform watched 12 billion minutes of video on the service, with the two most popular Twitch broadcasters being League of Legends and Dota 2. During one day of The International, Twitch recorded 4.5 million unique views, with each view watching for an average of 2 hours.

The modern eSports boom has also seen a rise in video games companies embracing the eSports potential of their products. After many years of ignoring the eSports scene, in 2014 Nintendo hosted an invitational Super Smash Bros. for Wii U competitive tournament at the Electronic Entertainment Expo (E3) press conference. It was additionally streamed online. Halo developers 343 Industries announced in 2014 plans to turn Halo into an esport with the creation of their own dedicated Halo league and a prize pool of 50,000$ USD. Both Blizzard Entertainment and Riot Games have their own collegiate outreach programs, aimed at cultivating new eSports talent at the university and college level.[44][45] Recently, universities and colleges in the United States such as Robert Morris University Illinois and the University of Pikeville have recognized electronic sports players as varsity level athletes and offer scholarships.

Physical viewership of eSports competitions and the scope of events have increased in tandem with the growth of online viewership. The Season 3 League of Legends World Championship, held in 2013, was held in a sold-out Staples Center. Its successor, the 2014 League of Legends World Championship in Seoul, South Korea had over 40,000 fans in attendance and featured musical talent, and opening and closing ceremonies in addition to the competition. 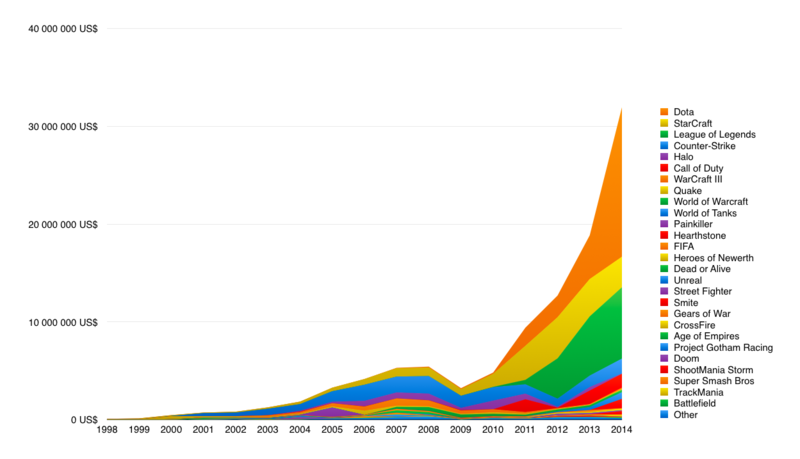